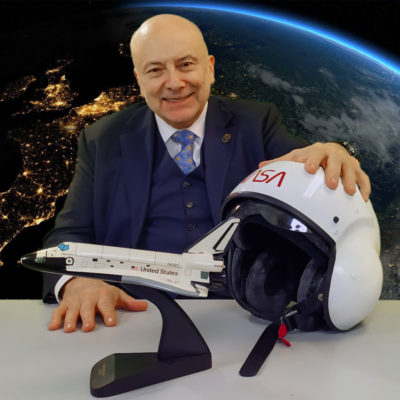 Franco Malerba is the first Italian astronaut; he flew in space with the shuttle Atlantis in 1992, as the payload specialist for the Eureca science platform in-orbit deployment and the first mission of the Tethered Satellite.

Presently he consults SMEs and startups on strategy and project management as “coach” of the European Commission’s EASME-Agency and contributes to the dissemination of space culture as editorialist of the weekly magazine La Stampa-Tuttoscienze and as founder-manager of the space meeting “Busalla Space Festival”.

After a master in Electronics engineering and a PhD in Physics, Malerba served as Reserve Officer ot the Italian Navy, then worked as research scientist at the Italian Research Council CNR, at the National Institutes of Health NIH (USA), at the European Space Agency ESA (ESTEC-Noordwjik) and as project manager at Digital Equipment Corp.(DEC).
Selected by ASI and NASA for Tethered Satellite shuttle mission, trained for spaceflight at the NASA-JSC center.

Elected Member of the European Parliament (94-99) was the rapporteur for the European Global Navigation Satellite System (GNSS) program.
From 1999 to 2005 worked as manager for strategy and institutional relations at Alenia Spazio in Turin and in Paris; from 2005 to 2013 as Science Attaché to the Italian Permanent Delegation to the International Organisations in Paris.