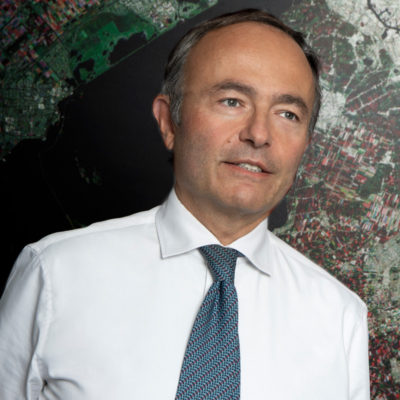 Born in 1963, Paolo Minciacchi joined Telespazio in 1990. Graduated in Electronic Engineering, in his firsts years in Telespazio he managed several important space missions such as ITALSAT, SAX, SICRAL. In 2002 entered in the Earth Observation business, holding several roles in the Programs & Application domain. In 2009 he steps on as Head of Operational Planning, Industrial Management and Value Added Production at e-GEOS, the ASI/Telespazio joint venture. In 2011 joined Spaceopal (the DLR GfR/Telespazio joint venture) as technical director. At the end 2016 he won the GSOp (Galileo Service Operator Contract) in the Spaceopal team and in 2018 he became CEO of the Spaceopal. In 2020, is appointed CEO of e-GEOS and Head Geo Information LoB of Telespazio.