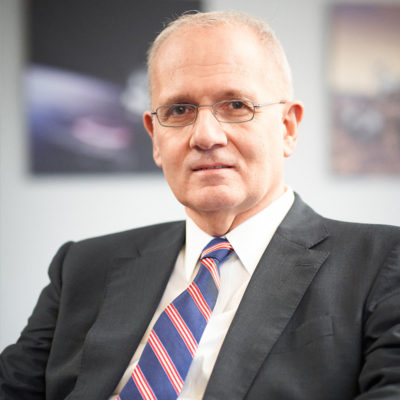 Jean-Yves Le Gall is President of the Centre National d’Etudes Spatiales (CNES), the French space agency, since 2013. In this capacity, he is interministerial coordinator for satellite navigation programmes. He is also Honorary Ambassador and former President of the International Astronautical Federation (IAF).

CNES is responsible for shaping and executing France’s space policy. It is involved in all aspects of space (Ariane, Sciences, Observation, Telecommunications, Defence) through its four centres of excellence in Paris, Toulouse and French Guiana, with 2,400 employees and a budget of €2.8m (2020). CNES represents France on the Council of the European Space Agency (ESA) and at many other international organizations, and is a partner in several commercial enterprises.

Born in 1959, Jean-Yves Le Gall is a qualified engineer and scientist who has devoted his entire career to the European space programme, holding positions within the French national scientific research agency CNRS, several French ministries, at Novespace and a first stint with CNES before joining Starsem and Arianespace, where he was CEO and then Chairman & CEO. In addition to leading CNES, he has also been Chair of ESA Council and Chair of the Administrative Board of GSA, the European GNSS Agency in charge of Galileo.

Jean-Yves Le Gall is a member of the International Academy of Astronautics (IAA) and Vice-President of the “Space Circle” at French think-tank CEPS (Centre d’Etude et de Prospective Stratégique). He chairs the France-Japan business council of Medef International and is President of the Foundation for the study of the Japanese language and civilization. He is also a member of the French-Mexican Strategic Council.

He received the Astronautics Prize from the French Association of Aeronautics and Astronautics (AAAF) in 2001. He was named Via Satellite magazine’s 2005 Satellite Executive of the Year and received a Lifetime Achievement Award in 2007 from the Asia-Pacific Satellite Communications Council (APSCC). In 2011 he was inducted into the Hall of Fame of the Society of Satellite Professionals International (SPPI) and received the Icarus Prize from the French association of professional aerospace journalists (AJPAE). In 2014 he received a Laureate Award from Aviation Week & Space Technology magazine and in 2018 the California Institute of Technology presented him with the International Von Kármán Wings Award.

Jean-Yves Le Gall holds the ranks of Commander of the National Order of Merit and Officer in the Legion of Honour in France. He has also been awarded the Order of Friendship by the Russian Federation and the Order of the Rising Sun, Gold and Silver Star, by the government of Japan. He is Doctor Honoris Causa of Technion, the Israel Institute of Technology.