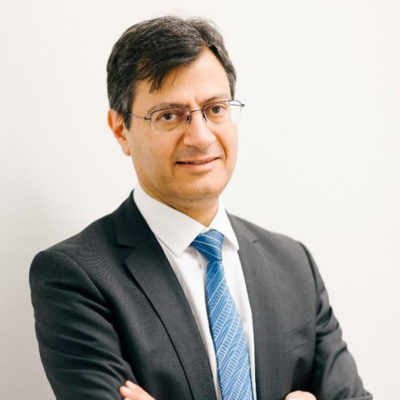 After a fruitful experience as Responsible for Marketing and Sales of the Earth Observation Division of Telespazio, during which he initiated the process that subsequently led to the creation of e-Geos, he was appointed Program Manager for Astrolink, a wideband internet satellite constellation designed by Lockheed Martin, Telespazio and TRW.
In 2003, he became Director of the Ground Systems Unit of Telespazio and Project Manager of the Cosmo-SkyMed Ground Segment, successfully leading the design and deployment of the Ground Segment as well as of the ILS and Operations Segment. COSMO-SkyMed is a highly innovative SAR (Synthetic Aperture Radar) Earth Observation Constellation.

From 2009 to 2014 Giuseppe has been Telespazio Vice President of Sales for National Space Institutions, Defence and NATO.
Appointed Chief Executive Officer of Spaceopal GmbH (Joint venture between Telespazio and DLR, the German Aerospace Center) in 2015, he managed the company up to 2017, during the Galileo deployment phase up to the Initial Services Declaration. In this period, Spaceopal has been awarded the Galileo Service Operator contract (GSOp), giving Spaceopal full responsibility to operate the system for the following 10 years.
Since 2018, he is the Head of Marketing and Sales in Telespazio.
Giuseppe Lenzo has a Master Degree in Aeronautical Engineering from Università di Roma La Sapienza and a Post Graduate Degree in Aerospace Engineering from Scuola Ingegneria Aerospaziale of Università di Roma La Sapienza. He is also an Alumnus of the IESE Business School.